skip to main | skip to sidebar

The Metropolitan Museum of Art May 1st! 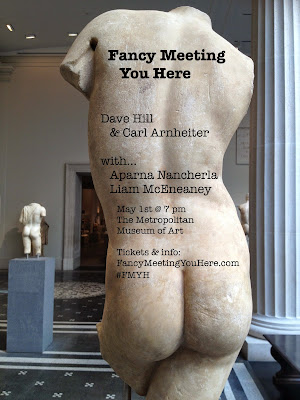 Posted by Fancy Meeting You Here at 12:07 PM No comments: 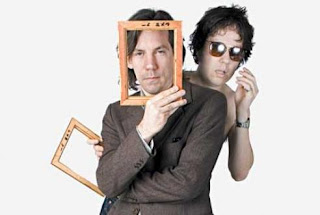 Thanks for your interest in “Fancy Meeting You Here.” We’re sure you’ve got questions that start with “What….,” “Where…,” or “When…?” Hopefully this will answer them.

First the “What…”
Fresh from an 18-month run at the Metropolitan Museum of Art in New York, Fancy Meeting You Here is a roving comedy show that takes audiences on a tour of cultural landmarks. No painting is too abstract, no modern art too modern, no study of the human form overlooked. Led and curated by Carl Arnheiter and Dave Hill.

For these tours we’re excited to be joined by comedians Tom Meeten and Tara Flynn.

Friday 11 Feb - National Gallery, tour starts at 7 pm
Meet inside at the Sainsbury Wing Entrance, please arrive around 6:45 or so.

Both tours are free.

Though the museums are allowing us to lead these tours, they don’t know any of the specifics as to where to meet, the time, etc…, so please don’t inquire with their information desks. They know a lot, just nothing about tour specifics.

If you do plan to attend – and we hope you will – please email us with the number in your group. There are limits to how many can join us, so drop us a line in advance at fmyhcomedy AT gmail.com If you’ve got any questions, drop us a line there as well.

That's a photo of us above. It'll prove useful in finding us before the tour.

Lastly, here's just a little on us individually:

Dave Hill is a comedian, writer, musician, and actor living in New York City in an apartment he pays for with his own money. Dave has starred in his own television show The King of Miami, which was cancelled. He has also appeared on HBO, Comedy Central, Cinemax, MTV, VH1, and some other channels. In 2007, Variety Magazine named Dave one of their "10 Comics to Watch," something he won't shut up about. Dave has written for The New York Times, Salon, and HuffPo and is also a contributor to NPR's This American Life. He has a rock band called Valley Lodge. Dave has banged a lot of chicks.

Arnheiter created and hosts Inside Joke, a comedy show in the form of a conversation, at the Upright Citizens Brigade Theatre. It's a cross between Charlie Rose and This Old House, minus the power tools and interruptions.
Posted by Fancy Meeting You Here at 12:33 PM No comments:

Last Friday, you were probably standing in line outside a Wal-Mart or a Best Buy or Big Lots – I was pretty tempted to hit Big Lots myself, that decorative fireplace mantle they had on sale for $249 ($190 off!) really caught my eye. I was set to buy three and consider my gift giving done.

Instead, I was here at The Met for their incredible doorbuster sale. Everything was up to 50% off making them half-off priceless! It was too much to resist.

As you might imagine, it was quite a scene, chaos sheathed in etiquette, which is about as chaotic as the social types get. A lot of chauffeurs and butlers downed by back injuries, a handful of lap dogs caught in the crush. The only person who was really injured in the melee was 72-year old Muffy Tomkins. Turns out her pearl necklace was on a little too tightly and she’d become lightheaded in the initial sprint. That said, her well-bouffed hair broke the fall.

I was on the steps of The Met at 3:30 and when those doors opened, people just bee lined it to the pieces they’d had their eye on all season.

My target, the Temple of Dendur, but a woman’s lawyer was already carrying it to the registers for her when I arrived on the scene. I told her about the 5 year-old I’d planned to buy the ancient Egyptian sun temple for as a new treehouse, and she told me it was a stocking stuffer for her maid’s son. Should have gotten there at 2:30.

Then by the time I arrived at Big Lots just after 5:30, all of the decorative fireplace mantels were snatched up too. Oddly the same woman and the same lawyer had just cleaned them out. So if you’re anything like me, there are still a few people left on your gift list this season. Let’s just finish them off right now. Here are some amazing pieces from the Greek & Roman wing. If they’re listed here, they’re all still available.

Theses helmets are great for kids who like to dress up, they’ll fuel hours of endless imaginative play. Adults who like to play dress up will enjoy them even more though. 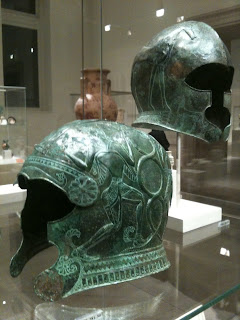 Struggling with that gift for your significant other? An aloe plant’s just not gonna cut it this year, lesson learned. Three words, “Chicks dig scars" If you’re not up for getting into a gnarly skateboarding accident or a shark fight, three more words – “Chicks dig jewelry.” You’ll make someone pretty happy with these. $175,000 for everything in the case, after doorbuster discount. You could also get a reproduction in the gift shop for $17.50 but believe me, they’ll know the difference, 2,000 years adds a lot to the patina. 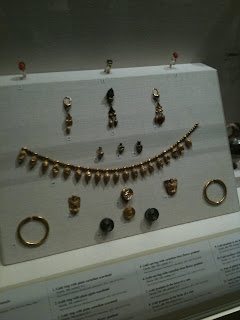 Maybe you have a niece or nephew who’s all set on attending art school. That’s great. Ideally you’d give them a trust fund, they’re gonna need it. But here’s something else to consider. Artists spend hours sketching still life objects, and this scultpure is the sort of thing that'll fit nicely in a nook of their off-campus apartment. Plus the $475,000 you spend saves them the $2.25 Metrocard fare and 41 cent suggested donation they’d give the museum when they came for a visit. This thing just pays dividends for the artist to be, and maybe you’ll get a couple new pieces for the fridge. 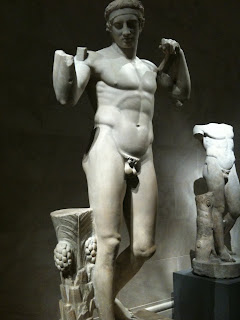 This isn’t necessarily the best holiday gift, but if you know someone who’s just moved and you’re struggling for a housewarming gift, keep that bottle of wine for yourself. Instead, give them this ancient Lion sculpture. I’m a little on the fence about this one, ideally you’d like to present them with a pair of lions for the end of their driveway or the entrance to their studio apartment with bedroom alcove, but the fact that it will have cost you more than their home cost them makes up for its absence. Plus when they have to insure this thing for $615,000, they’ll shut up about “the missing lion.” 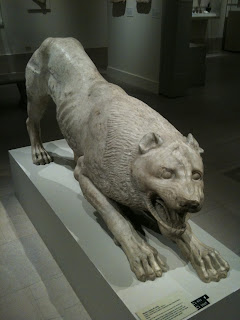 Sadly this is something a lot of families will hear this time of year – “It's probably Grandma’s last Christmas.” First thought for her is a sweater, because even when it’s 92 out, nana’s still bundled. Too obvious, there's no surprise in it for her. Instead look forward and send her out in style with a sarcophagus. Your grandparent will be the only one in the cemetery entombed forever in this elaborately decorated, one-ton dwelling. She's sure to be the envy of all the other dead people. Of course “forever” is a relative term here. The person originally buried in this probably thought forever was longer than 1,600 years. Still there’s some consolation that Gran will be on display 2,000 years from now herself. 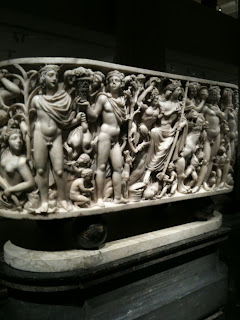 I mentioned the gift shop earlier, and yes, you can get a variety of gifts there - reproduction scarves, reproduction prints, reproduction Colonial-era playing cars. Show me the kid who doesn’t want to play hand after hand of War with those! If you choose to go this route, spring for The Met’s enhanced wrapping service. You have your choice of artists, a Lichtenstein, Warhol, Pollack or Ver meer perhaps, the inventory changes hourly this time of year. The museum then removes the artwork from their frames and wraps your purchase directly in the canvas, binding it with their signature ribbon of course.

Enhanced wrapping adds between $3 and $17 million to that $30 reproduction scarf, but it shows your loved ones you care and didn’t just phone it in this year.

Happy holidays and our best for the New Year! We’ll see you in January 2011.

Posted by Fancy Meeting You Here at 7:26 AM No comments:

We're back to close out the year. Last tour, one lucky museum-goer walked away with a van Gogh. This month we're stepping it up with two van Gogh's. Your choice.
This month, in addition to hosts Carl Arnheiter (Inside Joke) and Dave Hill (The King of Miami), you'll be misguided by:
JOHN GEMBERLING
Children's Hospital, Fat Guy Stuck in Internet, Human Giant
http://newyork.ucbtheatre.com/performers/449

The tour meets inside The Met to the right as you walk in at 6:45pm. Tour group tickets $16. If you're coming along or have any questions about the show, email us at FMYHcomedy at gmail.com.

Posted by Fancy Meeting You Here at 7:18 AM No comments:

It's hard to believe after last time that we're back to stroll the halls of the Met yet again! Again, just want to reiterate that we were nowhere near the roof when the bamboo "came down." It's more than likely you can't pin that one on us.
This Friday promises to be another edutational tour. Hosted, as always by Carl Arnheiter (Inside Joke at UCB) and Dave Hill (The Dave Hill Explosion, King of Miami, Diamond Snake).
They'll be joined by:
JUSTIN PURNELL (Conan, Colbert Report, School Night at UCB)
CRAIG BALDO (Comedy Central, Conan, MTV's Silent Library)
SHARON "MAMA" SPELL (Comedian & artist, illustrator of Papermag.com's "All the Rage")
The whole thing kicks off at 7 (ok, 7:05 if we're lucky) at the Metropolitan Museum of Art. We meet inside the museum lobby at 6:45 or so.
Because we go in as a tour group, tickets are $16, though prices vary if you've survived past 65 or consider yourself a student. We handle all the ticketing while we're standing about, then return with badges for us all to go in. $16 is the standard group rate, and a rare chance to see each of the comedians for slightly more than the $5-8 you'd normally have to pay for other shows.
Oh, we'll have some laughs after we talk about the recent weather where you've been. And who knows, maybe you'll even go home with an original van Gogh painting like October's lucky winner Mike Nelson! We're sure "Sunflowers" is helping to brighten up the bathroom in your basement studio apartment, Mike
See you Friday at 7. And if you have any questions, email us at fmyhcomedyATgmail.com
Posted by Fancy Meeting You Here at 7:37 PM No comments:

Fancy Meeting You Here is back and ready to misinform the bejesus out of you! Join hosts Carl Arnheiter (Inside Joke) and Dave Hill (Dave Hill Explosion) on this month's misguided tour of The Met.

The tour meets inside The Met to the right as you walk in at 6:45pm and will begin at 7pm. Museum admission is $16.

If you have any questions about the show, email FMYHcomedy at gmail.com.
Posted by Fancy Meeting You Here at 9:43 AM No comments:

It's happening again - August 6th at The Met

Fancy Meeting You Here once again visits the only comedy club in the world with a Van Gogh, a gift shop, and $350 million in props!
Thrill to guided tours by:
LEO ALLEN (SNL, Funny or Die)
LIAM McENEANEY (Comedy Central's Premium Blend, Tell Your Friends)
VICTOR VARNADO (Comedy Central's Awkward Comedy Show, Conan)
ANDREA ROSEN (Michael & Michael Have Issues, Flight of the Conchords)
Hosted by Carl Arnheiter (Dave Hill is currently invading the Edinburgh Fringe)
The group meets inside the museum lobby at 7. We enter the museum under a group rate. The fee is $16. Rates for students and Sr. Citizens are slightly lower - kids, bring a shut in along!
The Met, 5th Ave and 82nd Street.
Email fmyhcomedy AT gmail.com for more info
Posted by Fancy Meeting You Here at 4:20 PM No comments: